‘Reputations’ in the Press

At work in Premier, I’ve been working on a couple of radio series, the second of which is Reputations. The show, as with Holy Places, is presented by Roger Bolton and features six episodes.It was produced by Caroline Donne who is also a producer on BBC 4’s Woman’s Hour.

Reputations looks at the lives and legacies of well known Christian figures and examines the impact they’ve had on Christianity today.

My role in these, it started off that I was to be Production Co-ordinator on the series. Three of the programmes were recorded in external studios due to studio clash times, it turned out though that I recorded the remaining three and edited the entire series.

To be honest, it was a lot of work, but I’m really happy with how the final programmes sound. The first show was broadcast last week and looked at the live of St Paul. You can listen here.

The second show, looking at the life of Martin Luther, is due to be broadcast tonight at ten on Premier Christian Radio tonight at ten.

So it was absolutely lovely to discover that Reputations has been mentioned twice over the past week in the Press. It got a lovely mention in The Sunday Times on May 25th but I was delighted to see that Reputations also featured in The Radio Times this week as ‘Monday’s Choice’ Eekk! The radio choice for today! Awesome! Well chuffed! 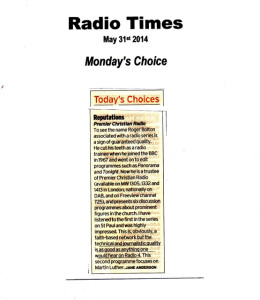 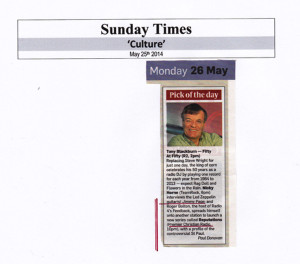